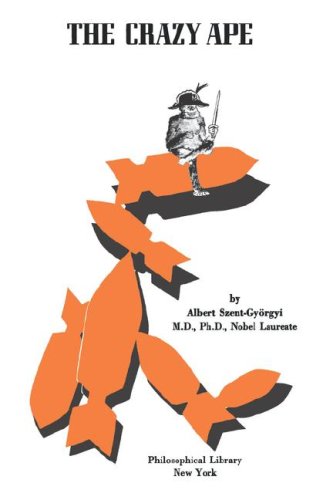 A Nobel Prize winner, Dr. Szent-Györgyi concerns himself with the underlying forces and conditions that have prevented the realization of the higher possibilities of the American Dream, and, by extension, of all mankind. He addresses himself especially to the youth of the world in his attempt to show how man, the more he progresses technologically, seems the more to regress psychologically and socially, until he resembles his primate ancestors in a state of high schizophrenia. The fundamental question asked by this book is: Why is it that most of the scientific research that is done to elevate human life serves in the end to destroy it? That this phenomenon exists is unarguable. How to alter it is the problem the author tackles. He finds the possibility, indeed the instrument of our survival, in our youth. Dr. Szent-Györgyi calls upon youth the world over to organize and exercise their power to create a new world. He implores them not to waste their energies in petulance and frustration?the world is ripe for the radical changes needed for man?s survival, and for youth to fritter away their opportunity would be to compound the tragedy and seal the fate of mankind. Born into the fourth generation of a noted family of scientists in Hungary, Albert Szent-Györgyi decided at an early age to devote his life to biological research. As a medical student he required international recognition for his studies in microscopic anatomy. The First World War, which he spent in the service of the Austro-Hungarian army, caused a break in his career. After the war he left his devastated country to work for ten years in various countries, notably Germany, Holland, England and the United States. He then returned to his native Hungary to help rebuild science there. In 1937, he won the Nobel Prize for his studies on metabolism and for the discovery of ascorbic acid (Vitamin C). He soon found himself in conflict with the growing movement of Nazism, was arrested, escaped, and was hunted for years by the secret service of Hitler. After World War II, disappointed by Soviet colonialism and the terrorist methods of Stalin, he left Hungary and found refuge at the Marine Biological Laboratory of Woods Hole, Massachusetts.