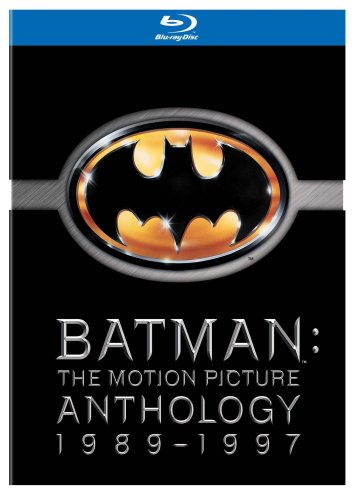 Boxed set including the first four Batman movies.
BATMAN: Inspired by Frank Miller's graphic novel THE DARK KNIGHT RETURNS, this gothic, Wagnerian treatment of the Batman mythos explains the origins of Batman and his nemesis, the maniacal Joker (a ripe Jack Nicholson), who has sinister plans for the citizens of Gotham City.
BATMAN RETURNS: As the pitiful, orphaned psychopathic freak the Penguin and the power-hungry capitalist villain Max Schreck (named after the actor who played Nosferatu) plot to gain domination over Gotham City, the Caped Crusader battles an equally fatal distraction... Cat Woman.
BATMAN FOREVER: Gotham City is once again under siege, this time by the mind-controlling Riddler and the diabolical Harvey Two-Face. The Caped Crusader cleans up with the help of his new side-kick Robin in this effects-laden thrill ride.
BATMAN AND ROBIN: The Caped Crusader returns to battle the abominable Mr. Freeze and green-thumbed Poison Ivy. To save his ailing wife, Dr. Victor Fries turns to a life of crime after a hideous accident makes him unable to tolerate even moderate temperatures, while Dr. Pamela Isley falls victim to mutated plant DNA when things go awry in a jungle laboratory funded by Wayne Industries. Of course, though their interests are diametrically opposed (Freeze wants another Ice Age; Ivy wants to make the world safe for plants), the two villains team up to defeat Gotham's dynamic duo of Batman and Robin, who are joined by butler Alfred's motorcycle-obsessed niece as Batgirl. And when Alfred is diagnosed as having the same terminal disease as Freeze's wife, the trio find themselves not only fighting an altruistic battle, but a personal one as well. A frenetic, colourful, and often overwhelming sequel to the films that precede it.