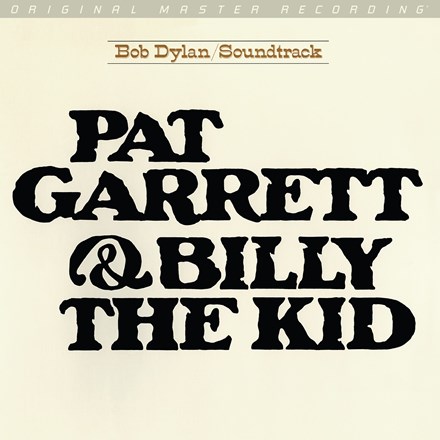 On the surface, Bob Dylan's Pat Garrett & Billy the Kid serves as a potent soundtrack to Sam Peckinpah's western of the same name. Yet the Grammy-nominated set is much more, remaining distinctive and intriguing because of the cast Dylan assembled for its creation--and their collective performances. The 10-track album effortlessly breathes with country, folk, blues, and old-time pop flavors. A-list collaborators, including drummer Jim Keltner, fiddler Byron Berline, and Byrds legend Roger McGuinn, assist Dylan in making instrumental portraits teem with detail, character, and a definite sense of place. Then there's "Knockin' on Heaven's Door."

Transcending the status of song, the Bard's poignant tune has gone on to become nothing short of an anthem--a symbolic hymn whose expressiveness encompasses resilience, sorrow, forgiveness, readiness, and more. Heard anew on exquisite analog and digital editions, everything here takes on deeper meaning and conveys

Mastered from the original master tapes, and strictly limited to 3,000 numbered copies on 180g vinyl LP and 2,500 copies on hybrid SACD, Mobile Fidelity's reissues feature reference-level instrumental separation and full-bodied tones that allow the songs o blossom amidst soundstages whose dimensions are limited only

by the breadth of your stereo system. The flinty, raw acoustic edge of Dylan and Bruce Langhorne's guitars come into immediate relief.

More from this series